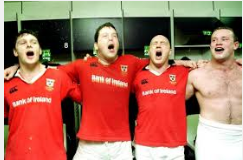 Still shocked to write the above headline. A colossal player who lived and breathed Munster Rugby. The team have emerged from his death a more galvanized force but the fact that it took for the passing of the head coach is desperately sad. People may have had a pop at his management selections but no-one can deny his love for the province. Foley will be sadly missed. 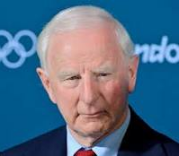 A miserable start to the Rio Olympics was bad enough with the failed drug test of disgraced Ireland boxer Michael Reilly but it was only compounded with the embarrassing ticket controversy surrounding Pat Hickey and Kevin Mallon. Kudos to the Brazilian authorities for swooping to make the arrests but it raised serious questions on how the Olympic Council of Ireland distributed their tickets. While Ireland Olympian athletes families and friends were struggling to buy tickets for various events, their tickets were being dispatched for inflated prices. It will be an interesting couple of months in terms of what happens now with both Mallon and Hickey back on native soil but it is up to the likes of Shane Ross and Patrick O’Donovan to stay on this fiasco and make the relevant decisions to remove people involved from their positions. Brazilian judicial process needs to take its course but for Ireland’s head Olympic supremo arrested in his bath gown in a different hotel room was the low point of the year for me personally. The man has zero credibility and it is time for him to go.

As Billy Walsh accepted his AIBA accolade last night, it would have being interesting to see the reaction of the likes of IABA and John Treacy. The departure of Walsh from the high performance boxing program was a devastating blow; one which was felt more in the lead  up to the Rio Olympics where the boxing team actions out of the ring were the main headline. Michael Reilly failed dope test was bad enough but then the revelations that the boxer was not with the rest of the squad leading up to the Olympics was a surprise. The fact that a couple of Irish boxers were caught placing bets on boxing bouts in the tournament only supported the view that the squad was in chaos. The lethargic performances from Joe Ward and Paddy Barnes again compounded the departure of Billy Walsh who guided USA to three Rio Olympic medals. Walsh is boxing coaching gold. Ireland boxing and sporting red tape proved fatal and USA’s gain is Ireland’s loss. A program which was the envy of many is one at ground zero. The back and forth in the media was pretty embarrassing and did little for the likes of John Treacy who is supposed to be an oversight figure in resolving disputes such as this. 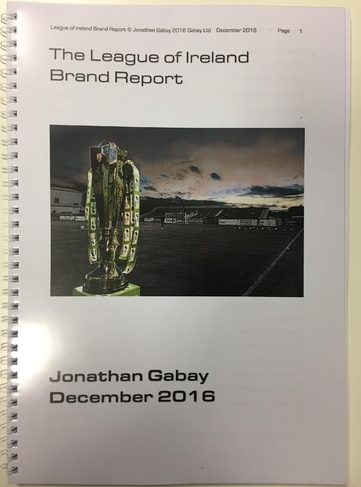 The bizarre spin on this report was akin to a comedy production down in the local hall. “As a brand, the league delivers. It’s cool” — sorry to bear the bad news Mr. Gabay but the attendances at certain grounds was abysmal. While Dundalk, Cork, Shamrock Rovers grounds were well supported, the same could not be said for the likes of Ferrycarraig. The situation was worse in the First Division where famed clubs of past glories such was Waterford United, Athlone Town were on the brink of bankruptcy. A certain CEO of an airline described an organization as a “North Korean Rat Infested Union Shop”, the name term could be labelled at the powers running the national game in this country. God help us, when the likes of O’Shea, Walters, Hoolahan, Long retire from the national team; no viable youth prospects coming through the ranks. Everything is okay though according to the head office. What a waste of money issuing this report. The SSE League is in chaos. Limerick and Drogheda will be welcome additions but numerous clubs are dying on their feet. 5K donation from John Delaney will hardly dent the club debts of any club in the league. Dundalk and Cork excelled but the rest of the league floundered.

Bradley Wiggins reputation is blown to pieces; Lance Armstrong scandal awaits in the New Year. The levels in which Team Sky Director David Brailsford wanted to quell the story speaks volumes; pro cycling is as bad as ever when it comes to injecting substances into where the sun don’t shine. It is a year where Paul Kimmage excelled; exposing the truth. It is a year where David Walsh association with Team Sky during the Tour De France undermines his authority in writing on doping scandals. Sky Sports News credibility when covering Team Sky must be called into accounts; additional probing of GB Cycling team is also required with the likes of Shane Sutton hovering around even though ridiculed earlier in the year. 2017 will see pro cycling kicked again in the nether regions but it remains to be seen where the sport goes from here. New era? Chuckling on that comment often bandied by Team Sky and Brian Cookson.

Newstalk losing their GAA media rights was bad enough but no strategic vision on promoting lower tier hurling competitions with televised coverage was damning. The fact that GAA officialdom have turned a blind eye to these competitions yet courting the likes of Sky Sports and Rte for televised coverage for the big games is shameful. There is distinctly no vision in the organization on how to improve the product on the pitch; black card controversy in football was evident throughout the season. The black card were issued early doors in the championship but when it came to the critical incidents of critical games, the black card interpretation was back in the media spotlight. Ditching the black card has being greeted with stubborn denial.

Cork Hurling and Football Senior team performances were a low point of the season. The Cork hurlers staved off relegation miraculously against Galway but the championship performance was well short of the level required. Tipperary dispatched Cork with minimal ease and their elimination to Wexford exposed massive leadership, work rate and skill set issues in attacking and back line play. No long term fix. Cork footballers did not fare much better; relegation to the Division Two ranks and then a shock loss to Tipperary in the Munster SFC. A gallant defeat to Donegal could not paint a positive picture on the season. A season to forget for all involved with Cork GAA. Pairc Ui Chaoimh aside, improvement is required on the pitch in both codes. An interesting year beckons down Leeside.

The player had a relatively incident free year; captaining England to a full sweep of international fixture wins but then his bad boy image reared its head with a disgraceful sending off for Northampton Saints against Leinster. Six week ban after a cowardly no arms tackle on Sean O’Brien and the player again proved that he cannot be trusted to lead or execute a team’s game plan in any manner. Eddie Jones comments on December 21st was enough; his international career is hanging by a thread.

When your best player decides it is better to stay on the sidelines, it is time to talk. Danny Sutcliffe’s decision to not be considered for selection says plenty about the current morale in the Dublin hurling team. Cuala’s exploits in All Ireland club will inevitably lead to several county players unavailable; the squad looks stretched and relegation looks a possibility. Ger Cunningham’s tenure has being shrouded in disappointment; no progress being made and they are falling behind Kilkenny and Galway in the province. Disappointing for the game in general, need a competitive Dublin hurling team in the All Ireland Series but they are not at the level at this time. Davy Fitzgerald as manager would have being a viable option? Dublin board missed a trick there.