As brutal and physical an encounter seen this season, Munster absorbed all that Glasgow could throw and won this match with a superb try from Francis Sailli. There was still time for Glasgow to squander a clear dropped goal attempt when Finn Russell decided to attack the Munster defensive line rather than take the responsibility of kicking a drop goal which would have won the contest. The subsequent line move broke down with a forward pass and Munster held onto win (14-12) and secure top spot in the pool.

A win against Racing Metro at a sold out Thomond Park next weekend will secure the province home field advantage in the last eight of this tournament. When you think about it, it is a superb achievement for the team and management after the trauma of losing head coach Anthony Foley in October and how the team fared last season in this competition where they were second best particularly away from home.

The following piece I wrote in the Munster Rugby Supporters Facebook Group late last night on my assessment of the game. Hope you enjoy it. In the coming days, will write more on some of the core themes from this piece (team mindset, concussion protocols, lack of officiating high tackle directive) but wanted to share my thoughts on this contest. 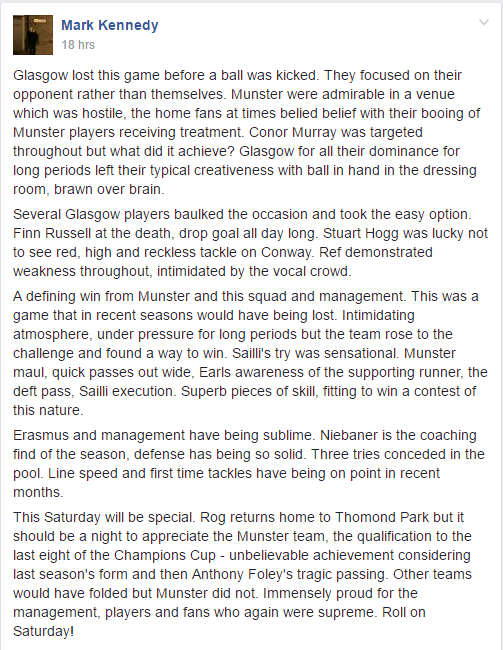