Speculation and it can only be called speculation at this point with David Wessels strongly linked to the Munster Rugby head coaching role. With rumors in Australia that Super Rugby Pro 14 outfit Melbourne Rebels is very much interested in Wessels as well, is this a classic agent created media report to attract interest for his client or is it a done deal for Wessels to come to Munster replacing Rassie Erasmus. Hawkeye Sidekick has his say and wonders if this appointment is the right fit for the club at this time. 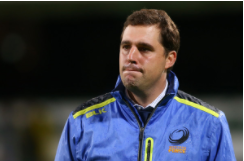 Wessels is an interesting candidate. If you were a recruiter, you would say that Wessels is a well rounded candidate with plenty of life experiences so far for such a relatively young age. He graduated with a Bachelor of Business Science and has also completed his Masters, in IT. Before embarking on a rugby coaching career,  Wessels was head of new media Touchline Media. He also helped launch the website, SARugby.com, now integrated into the Planet Rugby platform, a South African based rugby news site.

You are probably wondering on the coaching experience part of the resume. Wessels began his professional coaching career as a consultant for the Stormers in the 2008 season, a year later he took on the assistant coaching role at the University of Cape Town (Ikeys), winning the Varsity Cup and the Western Province League competition for the first time in 37 years. After eleven years in Cape Town he moved to the ACT Brumbies in 2012 as their Defense Consultant. Under his guidance, they went on to have the second best defensive record in Super Rugby. Western Force then hired Wessels as a defensive consultant for the Western Force, and later Senior Assistant Coach for the 2014, 2015 and 2016 seasons. Wessels then took over as Interim Head Coach for the last three games of the Western Force’s 2016 season. No wins in those three cameos.

Munster Rugby and the IRFU have stressed this week the need for a seamless transition between Erasmus and the prospective new head coaching hire. Wessels is also being linked to the Melbourne Rebels and considering some Australian media reports this week, the Rebels still believe that they will get their man. Munster Rugby and IRFU need to close the deal now if they are convinced that Wessels is their guy.

If David Wessels does get the Munster Rugby head coaching job, it will be a managerial appointment pretty much into the unknown. There is a distinct lack of head coaching experience (just over a season); the South African has served his time in various defensive consultant / assistant coaching roles. It is a risk for Munster Rugby given this fact. The upside is that Wessels could conceivably join up with the team mid-season and work with the existing backroom staff to seamlessly get immersed in the culture and running of the club.

Erasmus is a superb organizer, knows how to implement club structures for long term success. Wessels on the other hand has not this experience from his resume accomplishments. This season has seen the Force finish seventh in the Australasian conference. Six wins out of fifteen league fixtures in a competition. The hope is that Wessels brings the good elements from his Stormers, Brumbies and Western Force tenures to elevate Munster’s performances to the next level which is required this season. Wessels will be learning on the job in effect; hopefully the side will win games early to allow the South African to settle into the post if accepted.

An intriguing head coaching link. Some could consider this appointment as a gamble but IRFU and Munster Rugby have apparently examined all options. Wessels if media reports are to be confirmed is their man. Intriguing times indeed. Munster Rugby fans are again into the unknown. Erasmus came into the head coaching job with little background but did a fine job. Wessels’ come into the equation with even less rugby management experience. One would hope that Munster Rugby and the IRFU have done the required research, otherwise this appointment could damage the province long term.