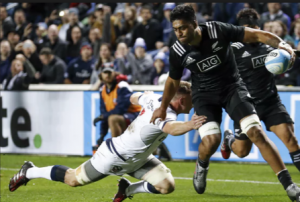 Mid-November internationals are upon us, a fascinating weekend of fixtures beckons with Australia heading to Twickenham to face England and South Africa looking for redemption with a victory against France in Paris. Hawkeye Sidekick previews the action.

You would have thought that England had lost to Argentina last weekend given the media commentary of the 21-8 victory. The opening game in the Autumn International series was always going to be problematic in terms of cohesion and tempo, then you add the abrasive Argentinian challenge and the performance delivered was the end result.

Eddie Jones was left a frustrated head coach last weekend. He knows that the team can do better. The squad know that they can do better and no better focus than to face arch sporting rival Australia in a test match.

England will have noted the improved performance of the Australian front five last weekend. The maul worked particularly well in the victory over Wales and the back row led superbly by Pocock stifled quick Welsh ruck ball throughout. The Australian half-backs and back line were sharp throughout, no know more so than Beale who robbed Welsh possession half-way and ran unopposed for the pivotal second half try.

England recall Owen Farrell to the starting lineup but significantly leave Maro Itoje in reserve as Launchbury and Lawes are selected. George Kruis misses out on selection altogether. The pack battle looks fascinating particularly the back row where Australia will look to disrupt at the breakdown. A big ask for Underhill, Robshaw and Hughes to provide the platform and quick ruck to unleash their back line.

A fixture which will tight and uncompromising at times; expect some moments of gain line brilliance. This test match will be decided in the final quarter with the bench playing a huge impact. England hold the aces in this regards with the likes of George, Itoje, Rokoduguni and Care to come on to change tempo and direction. England to edge this encounter but it should be feisty.

Can Scotland defensively hold up to New Zealand?

The key question ahead of this Murrayfield test match is whether Scotland have improved enough defensively since last weekend to seriously threaten the All Blacks. Scotland with ball in hand were excellent against Samoa last weekend scoring several tries but their defensive display left plenty to be desired.

A comfortable victory was marred by several defensive lapses of concentration which were punished by Samoa. The fringe defensive setup was particularly a source of easy gain line yards for Samoa and setup a nervy final quarter.

New Zealand will run riot if Scotland dish up a similar defensive hapless display and to be fair to Scotland, the prospect of facing the All Blacks is enough focus to improve this side of the game. Scotland have potency out wide. Hogg, Seymour, Jones, Russell are well capable of creating issues for New Zealand.

The Scottish pack must start this contest with tempo and on the front foot. The front five need to provide a platform in the set piece. A big ask and the scrum could be potentially a negative as New Zealand will look to build pressure on Marfo and Fagerson.

The back row battle should be intense. Hardie is a big loss for Scotland and would have being required to negate the influence of Fifita and Cane in this area. Fifita has being in superb form this Autumn and I fear for Scotland with the player looking primed to have another stellar game.

New Zealand to win this contest by ten points or more. The ominous post-game comments of Kieran Reid last weekend was that the standards dropped in the second half in Paris. Focus no doubt on trying to produce a complete game performance for New Zealand and that spells problems for Scotland. The hosts will fight hard but defensive mauls, fringe defense and scrum are areas to exploit.

Ireland look to the fringe players against Fiji

Joe Schmidt has made thirteen changes to the side which comprehensively defeated South Africa last weekend. An opportunity to see several prospects against a Fiji side who will look to create an unstructured game in order to execute their renowned offloading play.

A big opportunity for the likes of Herring, Porter, Conan in the pack. Massive test match fixture for McCloskey particularly in the back line. He has being the forgotten man of the three quarters division. A player of immense skill and physicality, the player still has a future in the unit which is now looking stacked with quality given the emergence of Aki to complement the likes of Ringrose and Henshaw.

Fiji have yet to name their test side for this fixture but presumably the key players from last weekend will feature. Nakarawa in the second row is a sublime player; his offloading skill coupled with his pace and power are traits not typically seen in a player of this position.

This is a nice test match for Ireland. It is a fixture where the fringe players on show will need to show their game smarts in counteracting the Fiji expansive play and pick their moments to go wide. The pack will look to set a platform early and if the scrum goes well early doors, expect Ireland to win with something to spare.

Schmidt has the luxury of a quality bench to call upon if the side are struggling to contend the Fijian threat but I do not think it will come to that. Ireland by fifteen points at least. Fiji had some good moments against Italy but were exposed in the pack exchanges, their defensive shape was narrow at times, something that will not have being missed by Ireland management.

Gatland has Georgia on his mind

The Welsh pack selection has raised eyebrows. The front row of Nicky Smith, Kristian Dacey, Leon Brown though inexperienced have the potential to excel at this level but they will be facing an abrasive Georgia front row who are vastly experienced.

This is a fixture which Georgia will look at with confidence. Their pack is more experienced than the Welsh selection picked for the weekend. Georgia definitely will look to build a platform in this area so the set piece execution will be fascinating to watch.

This is the test match where a shock could happen. Raynal’s officiating of the set piece will provide the indication of how Georgia go. It has to be the pack which leads the side to victory; a close contest but suspect that Wales will do enough in the pack to secure the win. Georgia’s performance will add fuel to the fire for RBS 6N inclusion.

Italy and Argentina with points to prove

Italy’s win against Fiji was the first step in gaining confidence. The pack were to the fore in the victory and setup the platform to secure a much needed victory for the team. The kicking game at times was mixed; Hayward lucky not to concede a try in the opening period after a slack clearance from the boot. The back line is a work in progress and several try opportunities were spurned.

Argentina came away from Twickenham with plenty of positives. The margin of victory was a little harsh on the side. Tuclet’s yellow card was harsh in my eyes; player going for the aerial bomb. The pack performance was abrasive and Hernandez provided some nice touches.

Italy have plenty of scope to improve given their performance last weekend; it will be an abrasive game in the trenches and Argentina for me has the better pack. Argentina to edge this contest on the basis of their pack with Creevy a prominent figure. Italy’s wayward attacking play to be exposed as well.

A rousing second half display but New Zealand’s intensity dropped only for it to be regained with the Naholo try at the death to give a twenty point victory. France showed flashes of offloading and run game which so many know the team are capable of but it is all down to consistency in the side.

South Africa have had a miserable week. Trounced by Ireland last weekend and then lost the RWC 2023 bid to their hosts this weekend. Coetzee is a man under massive stress and pressure. His side lacked leadership and cohesion last weekend.

Ireland were extremely comfortable last weekend for long periods. The front row struggled at set piece. The lineout dominance expected never materialized and the kick game from open play was exposed. Simple attacking moves were not executed with any fluency. A week to prepare and improve.

Two inconsistent sides enter this fixture. Slight edge to France on the basis of their second display against New Zealand. South Africa showed little in Dublin last weekend as an attacking outfit but given the issues on full view last weekend, hard to back them in this instance. Rassie Erasmus and Jacques Niebaner cannot come quick enough into the national side setup.