The announcement of the 2017 PWC Hurling All Stars went along familiar lines. Galway led the accolades with seven gongs, followed by Waterford with five and then two from Cork and Padraic Maher representing Tipperary. Hawkeye Sidekick reviews the selection; few complaints with very few 50/50 calls.

The goalkeeper position was personally the toughest selection of this award ceremony. Fair dues to Stephen O’Keefe from Waterford. The Ballygunner clubman had a stellar year with some sublime saves but felt a bit for Anthony Nash.

The Kanturk clubman had a stellar year; his distribution was first class and Cork were hugely indebted to the goalkeeper for launching a good proportion of attacking opportunities. I sometimes feel that the powers that be who do select the award winners quickly forget all the glorious hurling action of the early summer and instead focus from mid-August to draw up the conclusions. I wish the awards were more consistent across all the season.

The back line picked itself. Darragh Fives can consider himself incredibly unlucky to miss out. The Waterford defender had an excellent year and his sweeper role given the suspension of De Burca oozed class. Mannion if anyone was probably the one selection which I thought was a marginal call. Adrian Tuohy had an excellent year and was often assigned the arduous task of marking the top threat from the opposition. Mannion did have a good season but didn’t he play wing back for the duration of the season?

Delighted that Mark Coleman got the nod in this ceremony, should be a lock for young hurler of the year. The Blarney clubman oozed class this season; superb skill set and sideline cuts. His pace and ability to support the ball carrier was to the fore but the player will have learned plenty from the All Ireland Semi-Final where Brick Walsh used his physicality to full effect against the rookie to set the platform for victory.

Padraic Maher had an excellent season; five time All Ireland winner. His performance against Galway was excellent in the All Ireland Semi-Final and he has continued that form with his club. If anyone had any doubt of his attributes, look back over the game tape from last weekend’s club championship cracker against Ballygunner. His aerial ability, game reading and ability to hit points from long range. Maher is the full package.

The midfield selection was as expected. David Burke was consistently prominent in all that was good from the Tribesmen this season. NHL campaign business end, his running, distribution and ability to score a couple of points from play set the platform. This high performance level continued into the championship and his All Ireland final performance where he scored a couple of scores from play led by example.

Jamie Barron was Waterford’s key player this season; his performances were full of work rate and tempo particularly evident in the sublime cameos against Kilkenny and Cork in the All Ireland Series. When you consider the player was sick on the week of the final, the performance in the All Ireland final was nothing short of excellent. A couple of points from play.

Inspirational player for Waterford who will look to get over the line next season. Good that the likes of Lee Chin, Johnny Coen were given nominations. Both had strong years but the partnership from last season’s awards gala were the class act of this area of the pitch. 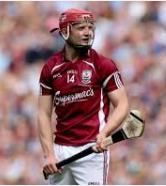 The forward line was an area where few can have any arguments. Austin Gleeson’s name was probably close until a subdued All Ireland final performance (more due to Gearoid McInerney dominance). His name suddenly was out of the equation.

Joe Canning leads the line from the half-forward position. The game management, scoring threat from sideline balls, placed balls and open play was immense for Galway this season. While Galway had superb cameos from the likes of Conor Cooney and Conor Whelan, when it came down to the crunch in the last quarter against Tipperary in the All Ireland Semi-Final, who actually stepped up to the plate?

Joe Canning. His points in that quarter were pivotal and the game winning score was sensational. The slow motion replay of the score; such a tight angle to hit the ball through despite under pressure from three Tipperary players. Canning should win the Hurler of the Year even on this score alone.

Waterford’s half forward line was a source of joy this season. Brick Walsh’s leadership and experience to create that platform in the opening periods of games is recognized with his accolade.

I am thinking back to the Kilkenny, Wexford, Cork All Ireland series games where Walsh won early aerial exchanges either setting up O’Mahony for routine points from placed balls or scoring himself. He was a noteworthy go to forward for Waterford this season.

Kevin Moran came into his own from July on. His performances in the All Ireland Series were superb; leadership and scoring threat evident in his goal in the All Ireland final. Pa Horgan’s scoring rate could not be overlooked. The Glen Rovers clubman was sharp throughout the season. Conor Whelan and Conor Cooney had excellent years as well; their cameos at different stages of the season gave Joe Canning solid support in providing scoring and attacking threat. Few complaints on this team in fairness.

I think three players stood out for me this year. James Doyle from Carlow who scored a sensational four goals in the Christy Ring Cup final against Antrim at Croke Park. We marveled about the hat-trick scored by Lar Corbett and Shane O’Donnell for years but not much was mentioned on this personal standout performance.

Tommy Doyle from Westmeath, his full-back play was sublime during the Leinster Senior Hurling Championship were standouts for me personally. His positional reading of the game, his pace and ability to win 50/50 ball was excellent, should have being given a honorable mention in the All Star nominations. Few full back were better this season.

Michael Cahalane for having the determination and fight to come back to intercounty hurling after being told two years ago to give up. Cork had plenty of inspirational figures in the hurling setup but Cahalane’s story was keynote and deserves a nod.