Bless me father for I have not blogged on the European Rugby Challenge Cup, it has being two rounds since my last blog. Hawkeye Sidekick reflects on this competition, checks the playoff picture and wonders if anyone wants to win the Pool 2.

After round four of the European Rugby Challenge Cup, here are the consolidated playoff standings with Edinburgh and Connacht Rugby leading the pack. 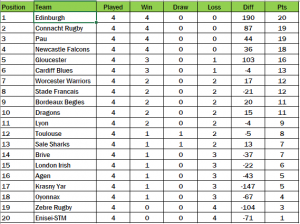 Falcons enter the New Year with renewed confidence in this competition. Dean Richards’ charges secured a narrow but key victory over Dragons at Rodney Parade.

25-27 scoreline says everything about the contest. Newcastle set the platform for this victory in an excellent opening period. Three tries scored in the first forty minutes where Radwan, Kibirige and Graham all went over.

The second half was a struggle as Dragons pack started to assert dominance. Henson again impressing with ball in hand and game management. Dragons will rue passing accuracy issues late on could have secured the victory.

Dragons are still in this competition but need to score heavy against Ensei and look for a result against Bordeaux to seriously have any ambitions of a last eight berth but it is going to be difficult as Bordeaux continued to build momentum with a hard earned bonus point win over Ensei-STM at home.

Several squad changes for Bordeaux and cohesion was an issue during second and third quarters but the bonus point was secured on sixty-three minute mark. Kudos to Joy Neville and officiating crew who let the game flow, key decisions were on point and further evidence that the Limerick referee is destined to climb further up the officiating ladder next year.

Pool 2: The Pool of Death

One look at the pool standings and you will see quite quickly that all four sides have taken points away from each other. The negative points difference for Blues, Lyon and Toulouse is unbelievable really. Cardiff Blues have endured a mixed December in this competition. They entered this stage of the competition in good form, a key road win over Toulouse but then were humbled by Sale Sharks away.

Blues steadied the ship with a hard earned 14-6 triumph at home. Anscombe key to the victory with an assured performance from the tee, adding to Morgan’s early second half try. Sale fought hard but line breaks were at a premium in trying, slippery conditions underfoot. The result leaves both sides still in contention for pool progression but they will need to improve their performance to overcome Lyon and Toulouse next month.

Lyon beat Toulouse at home 21-11 in a turgid affair, two tries scored during the eighty minutes from the hosts. Puricelli and Tuva scored opening half tries to suggest a bonus try win was on the cards but the second half was a dour affair, poor ball handling putting pay to a couple of promising attacking plays.

Toulouse struggled for parity for long periods. Neither side looked interested truth be told, just fulfill the fixture which is poor PR for this competition. A pool which needs to pick up in terms of intensity come January; who wants to advance to the last eight? You would wonder given the performances on show this past weekend.

The two sides in this pool who have taken this competition seriously look destined to advance to the last eight of the competition. Pau and Gloucester look primed for a pool winner take all tussle in Kingsholm at the end of the pool stage. Pau continue their 100% start to this competition with a good 26-12 win over Agen.

Gloucester had a very comfortable fixture scoring sixty-nine points against a hapless Zebre Rugby at Kingsholm. No need to go deep into this match report. Gloucester created line breaks at will and Zebre Rugby defensively were unable to cope with the pace on the wings.

Thorley had a massive performance for the home side, scoring four tries. The Pau fixture will be an excellent indicator on the European Challenge Cup credentials for Gloucester. Interesting end to the pool phase and a home quarter final berth is the prize up for grabs.

Stade Francais kept their hopes of quarter final qualification alive with a hard earned 26-20 road trip win over London Irish. An excellent turnaround from the French side after their embarrassing opening round loss away to Krasny Yar.

A tale of two halves as Stade struggled for a platform early doors. London Irish were dominant in that opening half and scored two excellent tries in the second quarter to give the Aviva side a 12-5 lead.

Stade Francais regrouped in the second half with a much improved performance but London Irish were extremely plucky during this fixture and with Greg Tonks accurately off the tee, there was only a point in the difference heading into injury time.

A key try from Ensor on full time secured the win for Stade Francais and a much coveted bonus point win which could be massive in reaching the quarter final stage.

Edinburgh Rugby continued their impressive form with an expected easy win over Krasny Yar. 76-0 speaks volumes. Edinburgh top the playoff standings at this time and few would argue that the Scottish side will not be the top seeds heading into the quarter finals.

Richard Cockerill will hope that this form continues in Guinness Pro 14 action with a derby against Glasgow Warriors looming large on the horizon for Edinburgh.

Saturday afternoon. Galway was full of festive spirit as Connacht Rugby blitzed their French opposition in a rampant second half as Matt Healy impressed in a 55-10 result.

This was a promising, encouraging performance from the hosts who after an even matched opening half cut loose after the break exploiting Brive down the flanks.

Healy’s performance (four try haul), one of the tries was superb, sharp foot work on the touchline was the main story line.  With these two wins over Brive and Worcester Warriors road trip loss to Oyonnax, it opens up a sizeable gap for Kieran Keane’s men who should have a home quarter final berth locked up before the last set of fixtures.

This second half performance needs to be the blueprint for more consistent, fast tempo performances from the side heading into Guinness Pro 14 action starting with Ulster Rugby at home.