With one round left in the pool phase, here is the consolidated standings (sorted per points tally) to highlight how tight it is currently in the race to secure a home quarter final fixture. 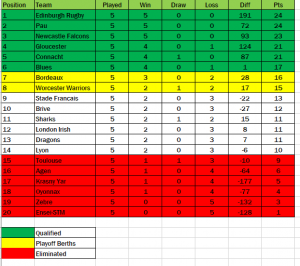 Ensei-STM (0) vs. (5) Newcastle Falcons: Dean Richards’ charges have already qualified as pool winners but will be keen to secure a home quarter final fixture at Kingston Park. I suspect Newcastle Falcons will have minimum issues dealing with the challenge of Ensei-STM and a five point haul is locked on here.

Dragons (4) vs. (1) Bordeaux: This is probably the key fixture of the round. If there is going to be drama, it may be at Rodney Parade. Dragons competed well for long periods last weekend against Bordeaux. With qualification out of their hands, Dragons can express themselves with little pressure on the result. Dangerous game for Bordeaux with added intrigue in what squad they will assemble for the fixture. Something tells me that Bernard Jackman’s charges will win this encounter narrowly. On seventeen points, Bordeaux look vulnerable.

Lyon (4) vs. (1) Blues: A significant home win for Blues secured the quarter final progression but if they harbor any thoughts of a home quarter final, then a bonus point is required. The mindset of Lyon comes into the equation, suspect that they will look to bring in the first line players rested in their loss to Sharks which spells danger for the Blues. A loser point for Blues, fifth ranked in the quarter final and a road trip quarter final beckons.

Toulouse (1) vs. (5) Sharks: A disappointing campaign in Europe for Toulouse was completed last night when the Blues beat them in a close encounter. How the mighty have fallen? Sharks have a remote chance of quarter final progression and will make things interesting with a bonus point try victory. Toulouse looking at other priorities will field an experimental side.

Gloucester (4) vs. (0) Pau: The standout fixture of the round personally. The winner taking the coveted pool crown and a home quarter final berth. Pau have being impressive in the tournament but a trip to Kingsholm is going to test their credentials to the maximum. Gloucester Rugby are incredibly exciting with ball in hand and buoyed with a fervent home crowd should do enough to win the contest. Pau will be a dangerous road team in the quarters.

Zebre (4) vs. (0) Agen: Two teams will little to play for. By virtue of the fact that Zebre are at home, edge this fixture to Michael Bradley’s side. Agen will look to stave off relegation but if their European campaign is anything to go by, best of luck with that.

Stade Francais (5) vs. (2) Edinburgh Rugby: Both these sides produced a scintillating encounter at Murrayfield last Friday. 34-33 to Edinburgh speaks for itself. The return fixture still has plenty to play for particularly for Stade Francais who know that a potential five point maul here and results going their way will result in their progression to the last eight of the competition. Edinburgh will do enough to secure home field advantage for quarter final. Try fest again beckons.

Krasny Yar (0) vs. (5) London Irish: A cohesive second half performance from London Irish blew Krasny Yar away, fear the same outcome this weekend in Russia. This is a dead rubber fixture.

Connacht (5) vs. (0) Oyonnax: A draw against Worcester Warriors was a result of mixed emotions from a Connacht Rugby standpoint. A poor first half gave them a mountain to climb but they recovered well to take two points from the encounter. Oyonnax travel to Galway with little appetite for battle. BP try win secured by half-time here for the Irish province.

Brive (4) vs. (1) Warriors: A tough fixture to call. Brive are competitive at home but with little riding on this fixture, will they field an experimental side? Warriors look vulnerable here given their result in France to Oyonnax last month. If Stade make it through, it could be due to Warriors losing here. Brive home win.