Group B. The battle of Iberia and then you add Morocco and Iran to the mix, hoping beyond hope that they can pull off an unlikely upset. Hawkeye Sidekick reflects on a group where the opening fixtures of the round could fundamentally change the course of the tournament. 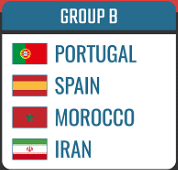 The opening fixture of this group for Portugal will determine realistically how far they will go in this tournament. A fixture against the old enemy Spain. A fixture where both teams will look to win and establish a decisive blow in the outcome of the group. The runner up of this group has a daunting task to overcome a quietly fancied Uruguay in the second round. The winner of the group, a potential date with Russia or Egypt. What fixture would you prefer?

Portugal had an indifferent qualification campaign but got their act together at the end of the campaign to beat Switzerland comprehensively to secure automatic World Cup qualification. The squad is loaded with talent. Cristano Ronaldo will look to create and score for a side who have massive experience defensively and in midfield with the likes of Alves ,Pepe, Quaresma and Moutinho in the ranks.

Bernardo Silva has the ability and potential to be one of the stars of this tournament. The Manchester City midfielder / forward passing range and potency in front of goal will be a huge asset for Portugal to supplement the attacking workload from Ronaldo.

How will Portugal setup though for Friday’s opening fixture against Spain? I hope that they do not go into their defensive shell and look to counter attack with the attacking talent at their disposal but I suspect they will go with prototype park the bus against Spain and ultimately loss to finish second.

Julen Lopetegui has being quick to decide his future as he was announced as Real Madrid manager for next season today. The managerial announcement will surely have caused a stir in the squad particularly among the Catalan players. Unity in the camp is going to be the key for Spain to succeed in this tournament; any discontent in the camp and this tournament is over before it starts.

The squad on paper is exceptional. From David De Gea in goals to Diego Costa upfront, there is a wealth of talent and depth in the squad to cover multiple positions. The lack of goals in recent warm-up games is a concern but it was not as if Spain were not creating good attacking chances?

Iniesta and Busquets in the heart of the Spanish midfield will dictate tempo and provide defensive stability respectively. Costa in attack will irritate defenders to the brink and will punish any lapses in concentration. David Silva’s play making and runs from deep will pose opponents in this group massive issues.

The first fixture against Portugal will be the decisive fixture; a cagey encounter beckons provided no early goals are scored. Both teams will look to perform from minute one but there will be a bit of ring rust with the start of the tournament. Spain are the team to beat in this group; their qualification campaign was impressive too with their performance at home to Italy very impressive. Spain to top the pool and avoid Suarez and Godin.

An interesting outfit to evaluate; undoubted talent with the likes of Benatia and Hakimi in the defensive ranks but I am looking for an attacking outlet to cause problems for the two big European teams. I am struggling. El Kaabi is an unknown attacking quantity and there does not appear to be goals flourishing in the ranks. Herve Renard quite frankly has his work cut out for him in this group and can only see an early exit for the North African nation whose fans will bring color, atmosphere to their fixtures.

Carlos Queiroz like Herve Renard will look to be defensively solid and look to launch counter attacks against their other group rivals. A daunting task given a look at the squad depth. Azmoun and Ghoochannejhad will provide the attacking threat for the Iranians. The worry is the other end of the pitch, not sure if the players in the goalkeeping and defensive ranks have either the experience or caliber to compete in this group. When you consider Ronaldo or Diego Costa against Iran, you suddenly start to feel my concerns for the Iranians. A result perhaps against Morocco is the objective but no hope of qualification for Iran. Queiroz will look to roam for pastures new immediately after the tournament.