Group F. A group which features Germany, the reigning World Cup Champions and one of the teams tipped to win the competition next month. Mexico, Sweden and Korea Republic will look to upset the odds but realistically it is a straight fight for the second place in the group. Hawkeye Sidekick previews the action. 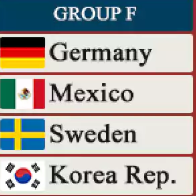 Joachim Low had the luxury of not selecting Leroy Sane from the final squad, enough said. Germany are laden with talent in all positions and the squad depth is strong in all positions.

The positives for Germany is their squad’s backbone is personnel who triumphed in this competition four years ago. Kroos, Ozil, Reus, Khedira, Hummels, Boateng, Neuer all feature in this squad. Experience aplenty in the squad and their knowledge and insight in how to win this competition is invaluable.

Plenty of attacking options for Low to chose from. Gomez, Werner and Reus bring something different to the table. Gomez with his aerial threat. Werner with his movement. Reus with his pace and ability to create space in the box. Throw in Muller who can play in the nine channel and options are there for German management.

The negatives are potentially two fold: Is Manuel Neuer fully fit? If so, does Neuer have sufficient game minutes under his belt to perform at his typical ultra high levels. Low needs to make a hard call on Neuer if either question is no with ter Stegen in the wings to fill in.

Sane’s omission was a surprise. His pace, movement and ability to score goals was to the fore with Manchester City. Low and management evaluated in international football conditions and felt it was not the time for the youngster. Draxler, Brandt and Rudy are ahead of Sane in the depth chart, it is a decision if Germany do not win the competition will be discussed over and over again.

Germany will have sufficient quality to win this group with a bit to spare. Their group will not fully test the side’s full capabilities until the knock out rounds.

Mexico realistically are hunting for the second place in this group along with Sweden and South Korea. Few surprises in the squad selection. The squad contains several marquee names.

Marquez in central defense. Salcedo looking to roam forward from full back. dos Santos looking to link midfield and attack with sharp, incisive passing. Hernandez looking for a chance to score a goal along with Carlos Vela.

Guardado and Herrera are key fulcrums for this Mexico side. Guardado at central midfield will look to protect his defense while supporting the likes of Vela with incisive runs from deep. Herrera at center back is a player with huge talent and pace, needs to be focused throughout.

The negative for Mexico is perhaps mentality based. What happens when Mexico concede the first goal? Will the team look to respond in a positive fashion or go out with a whimper? Mexico vs. Sweden decides who advances to the second round, hard to separate both teams.

A solid team, well organized and with their threat on the set piece will pose problems for all group opponents. The positives for Sweden is their organization, they will sit in when required and this could frustrate particularly Mexico who may throw caution to the wind and let the Swedes score. Their performance against Italy on the road to secure their place in this World Cup a perfect case study.

Experience aplenty in the squad. Larsson, Olsson, Jansson, Toivonen, Forsberg have all experienced marquee tournaments and their presence will be a reassuring presence in the camp. Lindelof will have a point to prove with Sweden after a mixed season with Manchester United.

The negatives for Sweden is potentially that they struggle to score goals in major tournaments. UEFA European Championships, they exited in the group stages; their performances were extremely one dimensional from an attacking perspective.

The onus is on Toivonen and Guidetti to provide the goals upfront; otherwise Sweden will look to score from the set piece. 50/50 call with Mexico on whether they qualify for the second round.

The underdog of the group. South Korea need to be organized in their defensive duties but questions abound on the quality of their goalkeeping and back line options to offset the threat of the other three teams in the group.

South Korea will look to their players who are plying their football careers in the UK and Germany. Heung-Min is an excellent attacking player and he will need the service from Ja-cheol and Ki Sung-yueng to impress.

The rest of the side need to be compact and solid and hope that this is enough to advance. However, with Brazil and tweak tough Serbia and Switzerland for company, an early exit looks on the cards!