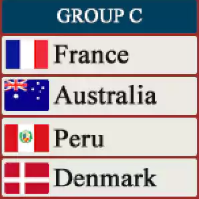 The squad is loaded with depth and talent in all positions. Lloris, Varane, Umiti, Pogba, Kante and Griezmann to name but a few of the star studded squad assembled for Le Bleu. The key point is the harmony between management and players as in tournaments past, all has not being so rosy in the French camp leading and during major tournaments, look no further than the South African World Cup when the French side under-performed and infighting in the camp was rife.

A nice group for France to evaluate their chances of World Cup success starts with a fixture against Australia. The Danish fixture potentially is the game to decide top spot. Hoping France produce a high tempo game plan where the likes of Lemar revel out wide to supply the likes of Griezmann who will look to end speculation om his club future with an TV cameo in Spain tonight.

France personally are another dark horse in this tournament; their speed and pace is a live threat for anyone if the team are in the mood. They will top this group with a bit to spare.

The Danish challenge needs to be respected. Their performance in their second leg playoff demolition of the Republic of Ireland was evidence that given the time and space, they will punish teams. The team is centered around Christian Eriksen, the mercurial midfielder looks destined to have an excellent tournament. His passing range, ability to create chances for colleagues and to score goals from runs from deep or long range efforts is the standout threat. Delaney as well fresh from his transfer to Borussia Dortmund can also contribute from a midfield perspective.

The team is defensively solid with the likes of Schmeichel, Christensen and Kjaer in the ranks. The issue for Denmark is if teams target Eriksen, what is the alternative Plan B. There were indifferent performances in the qualification phase of play when teams flooded the midfield area and nullified Eriksen’s influence as a result.

Their fixture against Peru who will be cagey and defensive will test Denmark’s patience and nerve to keep composed. If they can win their opening fixture, they are primed to qualify for the second round but France personally have too much in squad depth for this group of players.

The case of Paolo Guerrero has captivated all World Cup preparations for Peru. The inspirational Peru captain is now free to play in the tournament and is a timely boost for a team who will need goals to advance from this group. They have live threats upfront with Farfan and now the available Guerrero but question marks abound on the midfield creativity of the side.

Peru will look to play on the counter in these pool games and if teams do not respect Peru’s pace on the counter attack could get caught out. A potential star for Peru in the engine room of midfield is Tapia, a versatile player who plays in midfield for Feyenoord but can also play full back and center half as well. Peru’s inability to supply their key strikers could be the key impediment to qualification; defensively they are solid evident in their South American campaign.

The Socceroos will enter this group with nothing to lose. The squad is filled with domestic league players as well as players plying their trade in European leagues. The EPL and SPL representatives will need to set the tone for others to follow. Tom Rogic, Miles Jedinak, Matt Ryan have impressed with their clubs and need to show the same form in this tournament.

Aaron Mooy needs to be the play maker for this side and his performances will be an excellent gauge of how this side fare. The squad depth is a concern particularly defensively if suspension issues arise in the first two fixtures but expect Australia to provide pool opponents with plenty of issues in physicality and work rate.

Tim Cahill’s cameos to nick a goal may be required once or twice in this tournament. Australia are the underdogs in this group but there is an upset result in this group of players; not enough to advance but may dash another side’s hopes of second round progression.