Munster Rugby secured a home quarter final berth with a comprehensive six try demolition of Castres at rain drenched Thomond Park. A day which had started with torrential rain in the Midwest region resulted in this fixture being delayed by three hours. The East Terrace side of the pitch looking increasingly muddy as the grounds staff worked extremely hard to get rid of the surface water on the pitch. 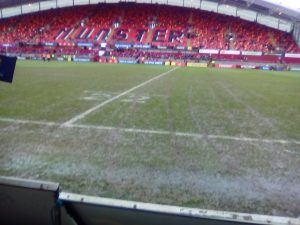 The change in time was incredibly tough on both teams. Munster Rugby went back to their hotel to reset and then focus back on the contest at hand. Rumors starting to circulate in the nearby bars that the game may only be sixty minutes but credit to the grounds staff, the pitch surface was playable (only just) but the fixture was able to proceed.

Castres with the aid of a strong breeze at their backs sought to create an early platform. They peppered the Munster twenty-two in the opening exchanges but found the hosts defensive line and discipline were on point. The box kicks executed by Conor Murray were only going ten yards but it varied the game plan enough to allow the Munster Rugby pack set about creating their own platform.

Rory Kockott at scrum-half looked lively in the opening quarter and his fourteenth minute penalty gave the visitors a deserved early lead but that was as good as it got for Castres as Munster Rugby’s pack started to turn the screw in the set piece with the scrum a source of penalty opportunities. Keatley in eight minutes (18 and 26 minute) had erased the points deficit and given the lead to Munster Rugby.

The pack were impressive in their ball carries. Kilcoyne setting the tone early, tackle were emphatic and his ball carrying early doors got the crowd and the team on the front foot.

Kilcoyne unfortunately had to go off with an apparent ankle injury early doors, a blow for the player but gave an opportunity to James Cronin to impress and the Cork man took the opportunity with both hands.

Cronin was utterly destructive at scrum time and his opponent was in all sorts of trouble and the penalty count for Castres was increasing at a rate of knots. Ben Whitehouse was now losing patience with Castres and Combezou was given a yellow card on thirty-two minutes for repeated penalty concessions by the French side.

This was the opportunity for Munster Rugby to break the game wide open and with the next scrum, they scored their opening try. A solid scrum. Murray game managing with efficiency and the decision to spin the ball out wide stretched Castres to breaking point where Earls was on hand to execute to score. Keatley did hit a superb conversion from the sideline to make it 13-3.

The Earls try lifted the pressure from Munster Rugby who then started to unleash their three quarters at regular intervals thereafter. Farrell’s line break just before the interval on another day could have seen a try but over elaboration from Murray and Conway scuppered the chance.

The opportunity was a significant moment of the game. Castres morale was dented massively after an encouraging start. Patience was now the key for Munster Rugby to execute in the second period and so it proved.

The second half was a rout for Munster Rugby as Castres’ penalty count started to soar; offside, scrum infringements the order of the day. Rhys Marshall who was dynamic with ball in hand all day emerged from the Munster Rugby maul to score the side’s second try.

The chance created from line out ball seven meters out from Castres’ line. Keatley again with the conversion. 20-3. Game over. The only question now was when and not if Munster Rugby would get the bonus point.

Castres discipline was now embarrassing. Several penalty infringements at scrum time five meters out could have prompted an earlier yellow card and penalty try but such was the dominance of Munster Rugby’s front three including John Ryan that Kotze was given a sin bin cameo soon after. A penalty try followed. 27-3. One more try for a bonus point.

Mobile phones were then out to check other scores. Ulster were down and out. La Rochelle or Toulon at home. Munster Rugby made sure that it was a home quarter final against Toulon with a superb fourth try. Earls who looked so sharp throughout, spotting the line break and making a thirty meter gain. Zebo’s running line was sublime and he strode with purpose to the try line. Try. Cue the celebrations. Mission accomplished. Keatley again unerring in the conversion. 34-3.

With the bonus point in the bag, it was time to then give the bench a run out. Castres were now a well beaten outfit and the new comers to the park made immediate impacts. Wootton’s season continues to grow from strength to strength. His determination to continue to run with the ball at close quarters saw the Macclesfield’s native to score the fifth try. JJ Hanrahan now on for Keatley converted. 41-3.

Castres tried to muster up the effort and game plan to unlock Munster defensively but after several phases in the Munster Rugby twenty-two surrendered possession with the abrasive back row of O’Mahoney, Stander and Cleote controlling breakdown affairs. The ball was quickly down the other end of the pitch and cue the sixth try of the day.

Munster Rugby’s maul again to the fore as Castres pack were retreating at a rate of knots. Cronin emerged from the mass of bodies with the ball over the try line. JJ Hanrahan again converting. 100% kicking effort from Keatley and Hanrahan. 48-7. Whitehouse blew up for the final whistle. A day which could have irked the team did not and Munster Rugby’s management of the delay was admirable.

Castres were the ideal opposition to come to Thomond Park today. A team whose road trip issues in European Cup action are well documented. They tried hard but there was no conviction in their game throughout and they started to lose the collisions from the second quarter on. The scrum issues were obvious which then saw line out steals take place on their own ball. A miserable day for the French side. Domestic league is the priority now.

Munster Rugby move onto the quarter finals of this competition. The pool was incredibly competitive. Racing 92 and Munster Rugby qualify from the pool, two teams who will be battle hardened entering into the business end of the season. Munster Rugby’s next opposition is Toulon in the end of the March, another day to analyze this opposition. Today needs to salute the management, players and supporters of the club for an incredible day yet again, quarter final qualification and hopes increase of more success when this competition resumes at the end of March.