Group G sees England and Belgiium pitted against Tunisia and Panama. Can a youthful England side with little pressure deliver good performances in this group? Can Belgium’s golden generation produce the results and progression that the squad depth in their ranks deserves? Hawkeye Sidekick previews the group setup. 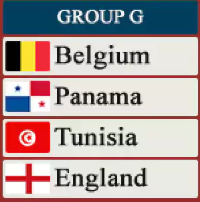 This is an ideal group for Belgium to settle into this tournament, looking to rid the ring rust and gain confidence heading into the second round of the competition. The squad depth is stacked with talent. The spine of the team looks strong with Courtois, Kompany, Vertonghen, Dembele, Hazard, De Bruyne and Lukaku to name but a few and a squad depth whose performance levels are high.

The question for me about Belgium is how versatile and adaptable the team is given the game time circumstance. Recent tournaments have seen Belgium resort to Plan A with little deviation from that plan. Given their manager Roberto Martinez was critiqued for the same failing in club football, it will be interesting to see if Belgium can adapt as in the knock out rounds, they will be asked to change their game plan. If they can, then this is a serious contender.

Their final group game against England will determine who tops the group. Given their experience and caliber in the ranks, Belgium should qualify with ease to the second round and win the group but as mentioned the ability to change tact during the knockout rounds to achieve a result is their real test.

The hype about England has reduced considerably for this tournament. The side is a work in progress with question marks on defense and goalkeeping key. The goalkeeping position is up for grabs. Pickford, Butland or Pope have precious little experience at this level, not sure who will be lining up in goal for the Tunisian game? Enough said and the fact that Pickford and Butland have a mistake in them does not inspire sufficient confidence either.

The defensive side of the game has the potential to be on point. Walker, Rose and Trippier on the full back flanks will provide midfield sufficient width and their ability to defend is on point. The key question is the central defensive position and who fills the position? Will England go three at the back? Cahill or Stones need to be dominant, huge ask given their lack of first team action with their clubs this season. Question marks defensively for me.

The midfield and attacking options look exciting. Kane will score goals provided that the service from out wide is on point. Can Dele Ali start this tournament with energy and positive attacking mindset? His partnership with Kane looks key to England’s success from an attacking sense.

England should be more than capable to advance from this group but I think lapses defensively and goalkeeping are not far away. England to advance as runners up in the group with a couple of scares. For England to be a dark horse, Sterling has to deliver. Time will tell.

Their opening fixture against England is their proverbial cup final. They need to get something from this tie to realistically have a chance of qualifying for the second round. Tunisian’s squad looks solid and compact with the majority of players plying their trade in France, Egypt, Saudia Arabia and in Tunisia.

Massive onus in this side will fall to Leicester City’s Yohan Benalouane who will need to marshal his team mates around him from central defensive to ensure that the side is compact, hard to breakdown and organized because the attacking options while pacy have no proven goal scoring threat in this level of competition. Khazri is the focal point in attack; needs good service but given possession issues against England and Belgium, it could be a forlorn experience.

What is the hope for Tunisia? The hope and expectation is to be competitive and look to be in these group games come the final twenty minutes and look to score on the counter-attack or set-piece. The lack of goal threat is an impediment, the goal ratio in the squad is low. Tunisia to offer plenty but an opening round exit looks on the cards provided they can turn the tables on England tomorrow!

The fairy tale of making the World Cup for Panama is here. It is now time to deliver and produce good performances. The squad is comprised of players plying their trade in MLS and Central America. This is a significant improvement in opposition and I fear for Panama in all facets of play.

Their opening fixture against Belgium could be a potential nightmare unless Panama are defensively solid. Belgium have the ability to carve this side open at various stages; it is up to Panama to be compact and perhaps park the bus for the opening period and then look to probe Belgium thereafter with Perez and Tejada the key attacking threat.

Tournaments like this at times have glorious fairy tale stories but for Panama, the fairy tale ends here. Penedo and Baloy will have to produce heroics defensively for Panama to have any chance of securing a result in this group. Panama look vulnerable and an opening round exit is on the cards.