Group D looks tough. Argentina will look to Lionel Messi for the inspiration, creativity and goals to advance but the side defensively look vulnerable when you consider that Croatia, Iceland and Nigeria are group opponents. Hawkeye Sidekick reflects on the squads. 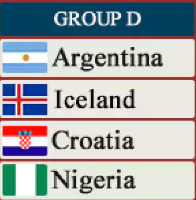 Jorge Sampaoli has a delicate balancing act to achieve with this Argentinian squad loaded with attacking talent in striker and midfield positions but unfortunately there are questions on how defensively solid the side are with this talent in the side. The friendly loss to Spain at the start of this year was evidence if evidence was needed that Argentina defensively as a team is a work in progress and whether Sampaoli can fix this during training camp is ambitious at best.

The pros for the side are the attacking talent options. Aguero, Messi, Dybala, Di Maria, and Higuain are incredible options to have. How Sampaoli keeps these players happy with sufficient game minutes to partner the mercurial Messi is the another fine balancing act required?

Plenty of defensive leadership and responsibility is going to rest on the likes of Mascherano and Otamendi. They will need support from their central midfield area with the likes of Biglia will need to be on point in their defensive duties. Banega is another player who could have a positive impact for Argentina in this tournament.

The lack of defensive nous collectively in the team is going to give group opposition an opportunity in these opening round fixtures. Argentina to just sneak into the second round but this opening round will see vulnerabilities in this Argentinian side which a potential last sixteen side will gleefully accept despite the brilliance of Messi.

A team of the sum of all its parts. The many years of cultivating a well run, efficient youth development system to unearth Icelandic talent has reaped its rewards. Iceland feature in yet another marquee tournament. Their support and the trademark hand clap will be greatly appreciated from the World Cup organizers.

The pluses for the side is their organization; hard to break down defensively and well organized. Their ability to execute superb set piece delivery led by Gylfi Sigurrdson and Johann Berg Gudmunson has created numerous goals and will be a live threat to all opponents. Their ability to go direct plays to the strengths of their forward line options such as Finbogason.

The negatives for the side are that they will be up against potentially at least two of the most potent attacking units in the tournament. Argentina’s attacking arsenal and their electric pace will test Iceland’s rearguard who at times have struggled to contain pacy attacking sides; elude to France quarter final loss in the UEFA Championships. The personnel has not changed drastically from this encounter. Croatia have the potential to pass a team into exhaustion.

Iceland will need to realistically get something from the Argentina and Croatia games to have a realistic chance of advancing to the second round.

Can Iceland evolve their game plan to throw different looks to their opposition? I have my doubts and I think they will at times look incredibly one dimensional. Alas, Iceland to go out in the opening round of the tournament.

A team which should get to the semi-finals of this tournament. They are an incredible solid squad; defensively solid and with marquee midfield and attacking options to cause endless issues to opponents in this campaign.

The pros for the side are the midfield options. Luka Modric has the ability to beat teams on his own; his ability to change tempo when required, his passing range and ability to come up with decisive goals from long range are huge pluses.

Mateo Kovacic has the ability to be a player of the tournament. The Real Madrid central midfielder ticks all the boxes; good with the ball, defensively on point and ability to support his strikers with searing runs from deep.

Ivan Perisic, Nikola Kalinic and Mario Mandzukic are quality front men and offer pace, power and aerlal threat for the national side. Mandzukic in particular has had another terrific season with Juventus at club level and if provided with good service, will be scoring plenty.

If there is a negative, it can be that Croatia can at times take their foot off the pedal during a fixture. It cost them during the European Champions and the qualification saw a couple of indifferent end of campaign results due to complacency during the game.

I would be disappointed for Croatia if they cannot emerge from this group as winners. They are the standout team in this group; experience and no genuine weak links in the squad. Their passing game has the potential to destroy teams in this group. Group winners for me.

The African nation is known for its pace and powerful football. From their cameos in USA ’94 where the likes of Finidi George became a household name to the footballing world, this side have not being afraid to express themselves on a football pitch.

There have being years of turmoil between the association and players but this is all behind the country as they look forward to this tournament.

The side have experience straight down the spine of their side with the likes of Obi Mikel, Moses, Musa, Etebo, Ndidi, Iwobi and Ighalo. They have pace and power to exploit teams on the counter attack which could cause issues for their pool opponents.

The negative is in the defensive squad depth. The goalkeeping position in particular is quite inexperienced with Ezenwa with only twenty-six caps, the other keepers have only a handful caps between them.

The defensive options are for me personally something of an unknown and I fear that the team may be prone to a couple of defensive lapses which will cause decisive goals being conceded.

Entertaining football is the objective but whether defensively they can be solid enough is a big question mark and for this reason, it looks like an opening round exit.