Group E sees Brazil enter the competition in a group containing Serbia, Switzerland and underdog Costa Rica. A group which may see some dull games but a group which should prove whether Brazil have the squad depth, defensive and attacking qualities to be considered a leading World Cup contender. 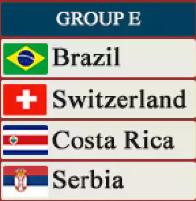 Tite has named an extremely strong squad for this tournament. Alisson, Ederson are quality keeper options for a defense which will be led and marshaled by the likes of Thiago Silva, Marcelo and Danilo.

The midfield squad options are endless. Paulinho has had a superb debut season with Barcelona. Fred and Willian have featured well in UEFA Champions League and also have defensive solidity with the inclusions of Fernandinho and Casemiro. Coutinho has the ability to provide superb cameos for his striking options as well.

Brazil hopes will depend on how fit is Neymar; the superstar has not featured in months for PSG and he needs to be on top form for Brazil to win this tournament. Yes, Brazil do have Firmino, Jesus and Costa but Neymar on form makes this Brazil into a completely different animal. Brazil if Neymar is fully fit could be rampant in these group phase games.

Minimal negatives except for perhaps quality depth in the defensive positions if suspensions come into play in the knockout rounds. The central defensive options look limited; plenty of full back options and something to monitor as the tournament progresses. Brazil have more than enough to top this group; their composure and patience will be tested by Serbia and Switzerland who are defensively well organized.

The Swiss are a difficult side to analyze; undoubted footballing ability and when you see this side in qualification for major tournaments, they look the absolute part, they play attractive football but then when it comes to the marquee tournament, they park the bus, go ultra conservative and you cannot wait for the side to be out of the tournament.

The positives for Switzerland is their squad profile; many players with vast international experience. They have in Xherdan Shaqiri a player who has the ability and potential to win games with moments of sheer brilliance. Johan Djourou, Stephan Lichtsteiner, Granit Xhaka, Valon Behrami will need to provide the leadership and supply to Shaqiri for the side to be successful.

The issue I see with Switzerland is their lack of a potent front man. Seferovic is their key striker along with Shaqiri will form the goal scoring threat. The habit of turning to prototype conservative for the Swiss is also not far away as well. If they go down that route, hope that they are knocked out of the tournament early. It is no fun to watch a Switzerland under those conditions!

An enigma. This side if the squad and management are at one will be very competitive. Serbia will look to play on the counter attack in the key fixtures of this pool, bad news for anyone paid into watch themselves and Switzerland! In Dusan Tadic, they have a player whose pace in the counter attack could create massive issues for group opposition.

The positives for the side is that the spine of the side is rock solid. Stojkovic, Ivanovic, Matic will provide defensive assurance to those around them. Kolarov has had a superb season with AS Roma and his delivery from the full back position is still on point. A team who will be defensively disciplined and will revel in the Russian summer.

The negative for the side is potentially their striker options. Aleksandar Mitrovic on top form with Serbia is a goal poacher supreme but if anyone has watched EPL can testify, the player does lose the plot from time to time. Can Serbia find an alternate striker perhaps in Prijovic to have a breakout tournament.

Expect Serbia to go 4-5-1 formation potentially with Tadic roving behind Mitrovic; marginally going for the Eastern Europeans to advance but the second round may be their lot.

I love Costa Rica, a fabulous country, great people and great culture but I think this World Cup may be a chastening experience for the nation. Navas in the Costa Rica goal will have to play out of his skin to prevent his side from going down to a couple of heavy losses.

I am seeing nothing in the outfield options to inspire confidence. Gamboa, Ruiz, Oviedo and Campbell are the standout talents in this squad but this looks a daunting challenge.

A team who will struggle to score goals and struggle to keep clean sheets, hopefully Costa Rica are competitive and force a result but I am not optimistic for their chances. An early exit beckons.